With the clinical research space expanding and trials becoming ever more global, clinical trial stakeholders are putting greater emphasis on how to properly manage the documentation that is collected through the course of a clinical trial. For the most part, this documentation is organized and managed in what is widely called the Trial Master File (or Electronic Trial Master File).

The MHRA, the Medicines and Healthcare products Regulatory Agency for the United Kingdom, has released some insightful information and explanation into some of the frequently asked questions regarding Trial Master Files (TMF) and Archiving within the Life Sciences industry. While most of this information is specific to UK and EU regulation, the explanations given are relevant for Trial Master File management globally. Below, you’ll find a snippet their initial FAQ section, and a link to follow to the remaining FAQs on their website.

For those new to clinical research, you may be wondering what it all means. What is the role of eTMF in clinical research? What does a TMF or eTMF actually do for you? Is it really that important? Whether you’re new to TMF/eTMF management, or a veteran looking for a refresh, below you’ll find 5 frequently asked questions about Trial Master Files explained in detail.

A TMF is the collection of documentation that allows the conduct of the clinical trial, the integrity of the trial data and the compliance of the trial with GCP to be evaluated. It is also essential to allow the trial to be effectively managed by the sponsor as it allows the appropriate individuals access to the necessary trial documentation.

The documentation contained within the TMF should be sufficient to adequately reconstruct the trial activities undertaken, along with key decisions made concerning the trial. Consideration should be given to the TMF being a stand-alone set of documentation that does not require additional explanation from the associated sponsor or site staff.

2. Is a TMF always required?

Yes. The documentation from a trial of an investigational medicinal product must be filed in the TMF. The TMF forms the basis for an inspection to confirm compliance with regulatory requirements. The TMF is normally composed of a sponsor TMF, held by the sponsor organization (or to whom this function is delegated), and an investigator site TMF, held by the investigator. These files together are regarded as comprising the entire TMF for the trial and should be established at the beginning of the trial.

3. Can the sponsor and investigator TMFs be combined?

The segregation would be expected by MHRA GCP inspectors in all situations apart from where the sponsor and investigator are essentially the same. This can often occur for trials sponsored by NHS Trusts or Universities, where the Chief Investigator (CI) is an employee of the sponsor. In these situations, the CI is most likely to be acting as a clinical investigator in the trial and also, in many cases, has been formally delegated a number of sponsor tasks from the Trust research management function.

This means that documentation typically held by the sponsor will need to be accessed by the CI, thus the CI file could be a combined sponsor and investigator TMF. GCP Inspectors have seen situations where the research management/governance department of the sponsor maintains the sponsor file upon the belief that this would be an expectation to comply with GCP. In reality, it results in extensive and needless copying. In such a scenario it is perfectly acceptable for the management of the TMF to be delegated to the CI with the CI maintaining all the necessary documentation.

The sponsor must still maintain an adequate level of oversight to ensure that the correct documentation is being maintained. One example of such oversight would be the availability of guidance or procedures within the organization to assist the CI in maintaining the files together with monitoring and/or audit of the TMF and with the research management/governance department holding oversight documents, for example, risk assessments, governance, CI questionnaire returns etc.

4. Can management of the TMF be subcontracted by the sponsor and what should be considered when using contract research organizations?

Yes, the management of the TMF can be subcontracted.

The complexity of the TMF is increased by the use of CROs in assisting in the management and/or conduct of the trial. In conducting allocated functions, the CRO will be generating documentation that will need to reside in the TMF and/or the CRO may have been delegated the task of managing the sponsor’s TMF. It is suggested that there is some documentation, e.g. a plan, to clarify the management of the TMF, for example, it could address:

These records are important in demonstrating that the CRO followed its own quality system. Alternatively, these internal CRO records could be retained and archived by the CRO and it is acceptable for the CRO to do so, but such an arrangement would need to be clearly documented.

Where the sponsor has delegated the maintenance of the TMF to the CRO as well as many other trial conduct functions, there will still be a requirement for the sponsor to hold some trial documentation in order to undertake oversight of the conduct of the clinical trial. In this situation, many of the documents will be copies of those held in the TMF of the CRO. However, there will also be documentation that demonstrates the oversight of the sponsor, for example, internal correspondence that may not be in the TMF of the CRO, but this documentation must eventually form part of the TMF.

In GCP inspections of sponsor’s where virtually all the trial conduct functions have been subcontracted, it would be expected that the sponsor provides documentation to demonstrate oversight of the trial conduct. In such situations, the quality system of the sponsor should reflect its oversight functions and this would include procedures for the handling of trial documentation that demonstrates this is taking place.

This may take the form of sponsor oversight files and defining what needs to be maintained. It is recommended that sponsor oversight can still be demonstrated if the files of the sponsor are amalgamated with the CRO TMF at the end of the trial. One common problem is that the oversight is done extensively be email, for example demonstrating review and approval of key trial documents, but these emails are not made available to the inspectors.

5. How should the TMF be organized?

The organization of a sponsor file can become quite complex such as when the trial is multi-country or multi-centre. Typically documentation is organized in the sponsor file at three levels: Global, Country and Investigator Site. This is a recommended approach to take as it allows particular sections of the TMF to be made available upon request, although amalgamation of the files may be a more suitable approach to take if, for example, a single country trial is being performed (with combination of global and country level files) or when running a single site study, where all three levels can be combined.

The sponsor organization should identify where all of the potential documentation that should be filed in the TMF is located. It does not all necessarily need to be in the same location, but it should be clear where it is from TMF procedures/indices etc as the TMF must be readily available both during the trial and during the archiving retention period following the trial.

For example, it may be appropriate for an organization to determine that SAE cases will all be retained in the PV department, including the SUSAR receipt confirmation rather than printing it off the PV database and filing in the TMF. This detail, may, dependent upon its complexity require formal documentation in a procedure (e.g. SOP).

In large commercial organizations, the TMF could include documents from across a variety of different departments other than clinical operations, for example, Data Management, Statistics, Pharmacovigilance, Clinical Trial Supplies, Legal, Regulatory Affairs etc., as well as those provided or held by CROs.

This contrasts with a small single centre non-commercial trial, where the documentation is likely to be much less and could be limited to just the investigator and pharmacy files. Some documentation may be non-study specific, for example, the validation of a computer system that is used for numerous trials but is still needed to demonstrate the quality of the trials.

To read the remaining FAQs, feel to visit the MHRA forum. Thanks for reading and feel free to contribute a question about TMF that we can answer below! 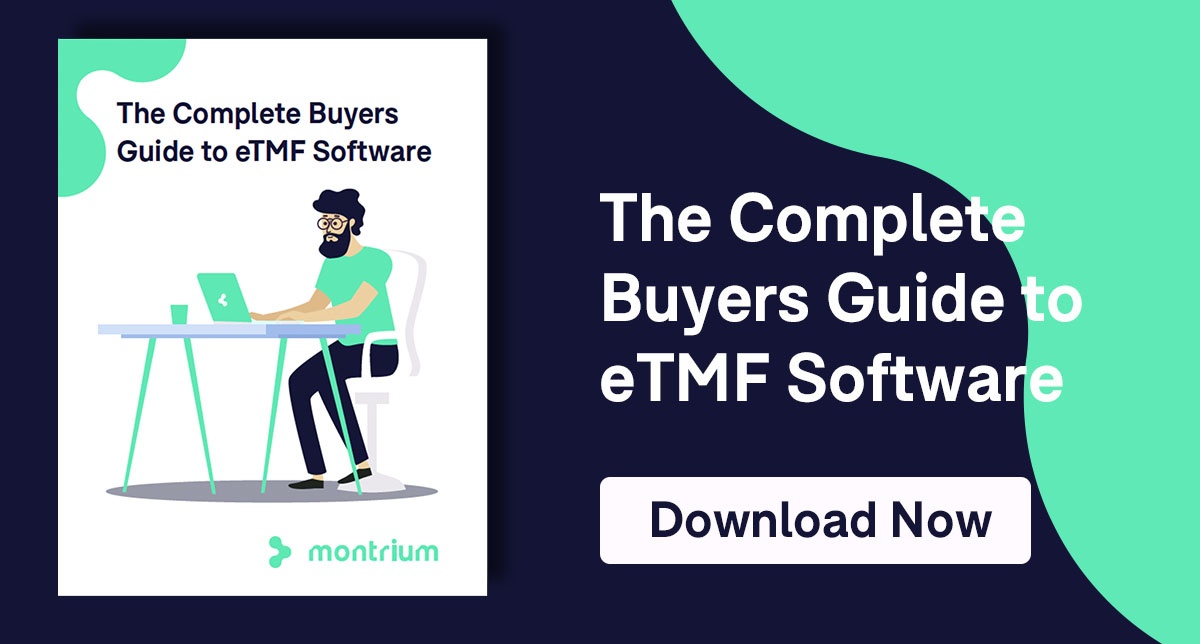 About the Author: Oliver Pearce

Oliver heads up Montrium's Commercialization team and is a regular contributor to the Montrium blog. Oliver writes on a wide range of topics that tie in his passion for technology and his deep understanding of the regulatory requirements.

How to Successfully Prepare for the Upcoming FDA eCTD Deadlines